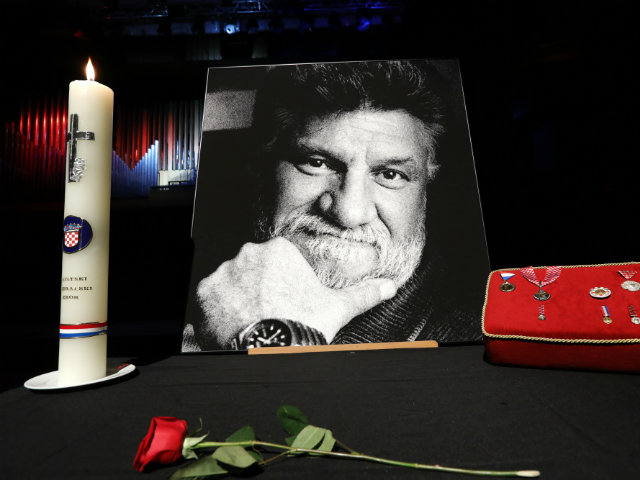 A year after former Bosnian Croat military official Slobodan Praljak took poison in the Hague Tribunal courtroom, the anniversary of his death is being commemorated in Croatia and in Bosnia and Herzegovina.

Several events are being held in Croatia and Bosnia and Herzegovina on Thursday and Friday to commemorate the death of former Bosnian Croat general Slobodan Praljak, a year after he swallowed poison in the courtroom while the verdict finding him guilty of war crimes was being read out.

Most of the events are taking places in Catholic Church venues, including the premiere of a play entitled ‘I, Slobodan Praljak’, which will be staged at a Herzegovinian Franciscan monastery in Zagreb.

The one-handed play was written by university professor, writer and columnist Slobodan Prosperov Novak, and will be performed by actor Bozidar Alic. Both are known for their conservative political views and have said that they considered Praljak a friend.

Prosperov Novak told Hrvatski tjednik that the play is an attempt to look at the “cognitive drama of a brilliant mind, a man who has been comprehensively educated, achieved [success] in many areas, a true ‘homo universalis’, and has resorted to such an act”.

Alic meanwhile has described Praljak as a “Croatian martyr”.

In Zagreb on Friday evening, a mass will be held in honour of Praljak at the Holy Mother of Liberty church in Zagreb.

Earlier that day, a panel discussion will be held at the national cultural institution, Matica Hrvatska, focusing on the verdict that convicted Praljak and five other Bosnian Croat political and military officials in November 2017.

“His [Praljak’s] sacrifice, contempt and resentment for the Hague Tribunal obliges us to reexamine historical, political and legal facts in order to establish the truth,” says the invitation to the discussion.

Among the speakers will be Miroslav Tudjman, an MP from the governing Croatian Democratic Union, HDZ, who is the son of the first Croatian president, Franjo Tudjman.

Praljak and the five other wartime officials of the unrecognised Croat-led statelet of Herzeg-Bosnia were also convicted last year of participating in a joint criminal enterprise with Franjo Tudjman and other senior Croatian officials with the aim of persecuting Bosniaks.

In the town of Grude in Bosnia and Herzegovina, where the Herzeg-Bosnia statelet and the Bosnian Croat wartime force, the Croatian Defence Council, were founded during wartime, a mass and prayers will be held in Praljak’s honour at a Catholic church on Thursday.

Meanwhile at a basketball match on Monday in the Croatian city of Zadar between the local Zadar team and Buducnost from Podgorica, a Zadar-based fan group called Torpedo raised a banner in honour of Praljak.

As well as Praljak’s picture, the banner was emblazoned with a tribute that concluded: “Thank you, general, for everything!”

Praljak, the wartime commander of the Main Headquarters of the Croatian Defence Council, took poison in the courtroom as the Hague judges confirmed his 20-year sentence for wartime crimes in Bosnia and Herzegovina.

He stood up in court and shouted that he did not recognise the verdict and was not a war criminal, then drank potassium cyanide from a vial which he had smuggled in. He died in hospital about two hours later.

In October this year, the public prosecution in The Hague completed an investigation into the suicide without being able to establish how Praljak obtained the potassium cyanide.

Convicted last year alongside Praljak were Jadranko Prlic, the former president of the Herzeg-Bosnia government, who was sentenced to 25 years in prison, while Bruno Stojic, former defence minister, and Milivoj Petkovic, former chief of the Main Headquarters of the Croatian Defence Council, got 20 years each.

After his death last year, Praljak was mourned in Croatia despite his conviction, and several thousand people, including two Croatian ministers, MPs and generals, attended a ceremony commemorating the deceased Bosnian Croat general in Zagreb.