VRANJES-PALMER TALKS: Srpska is fighting for its rights by legal means. Calls for war are coming from Sarajevo 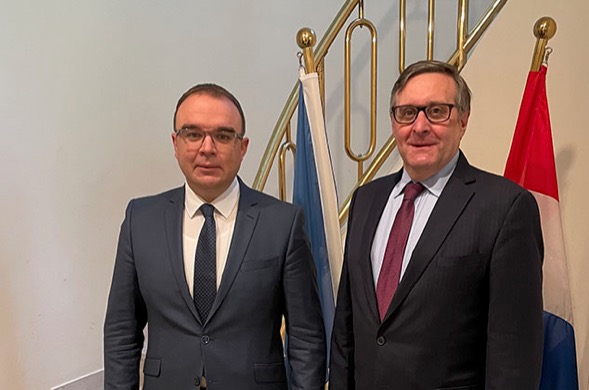 BiH Ambassador to Croatia Aleksandar Vranjes briefed the State Department’s special envoy for electoral reform in BiH, Matthew Palmer, on the current political situation in BiH, emphasizing that Republika Srpska uses only legal means for its fight for constitutional rights. At the same time, calls for war come exclusively from Sarajevo.

The numerous impositions by high representatives attempt to reshape the political system. They started with the BiH Constitutional Court and continued with constant disempowerment of the Republika Srpska. The RS government, led by Milorad Dodik, was in a situation where they had to do something to preserve the Dayton constitutional position. – Ambassador Vranješ pointed out.

Vranjes emphasized that Valentin Inzko’s latest decision led to restrictions on the freedom of speech of the Serbian people in BiH, which was the straw that broke the camel’s back. He asked Palmer how US citizens would react if someone revoked their right to freedom of speech defined by the First Amendment.

In response to restrictions on the rights of the Serbian people and disempowerment, the BiH ambassador to Croatia said, Republika Srpska refers to the text of the BiH Constitution, which is the highest general legal act in force in BiH and should be above all laws and imposed decisions.

On the other hand, from Sarajevo, we hear only calls for war when we mention the application of the BiH Constitution as if the same Constitution is not in force there. Part of the international community has completely ignored all this.

There was no criticism directed at those politicians who do not want dialogue but see the only way out in the war – Vranjes pointed out.

He reminded Palmer that Republika Srpska and Milorad Dodik have called for dialogue for more than 15 years. They started with the discussion on judiciary system, then with the debate on the law on the Constitutional Court, which would prevent further outvotings, and the last call for dialogue between the parties and constituent peoples of BIH.

From May this year, the partners from FBiH turned a deaf ear, and we did not see that the international community encouraged that dialogue.

Today, when the Republika Srpska has no choice but to try to regain its constitutional position by legal and political means, we get calls for war, not dialogue – Vranjes pointed out.

He added that, unfortunately, part of the international community accepted the “spin” that Dodik’s fight for the application of the letter of the BiH Constitution was an act of breaking the Dayton Peace Agreement, which includes the same Constitution Dodik persistently refers to.
Ambassador Vranješ expressed his assurances that the Republika Srpska and Milorad Dodik are acting politically exclusively within the framework of the Dayton Peace Agreement and that they will not endanger the position of BiH defined by the Constitution of BiH with any of their moves.

Matthew Palmer informed Ambassador Vranješ about his activities, primarily on the topic of election legislation in BiH, and expressed optimism that the parties in the Federation of BiH will still find common ground on changes to the election law, no matter how challenging the process.

What a about Posavina Croats rights?!
Did Croats have any rights there?