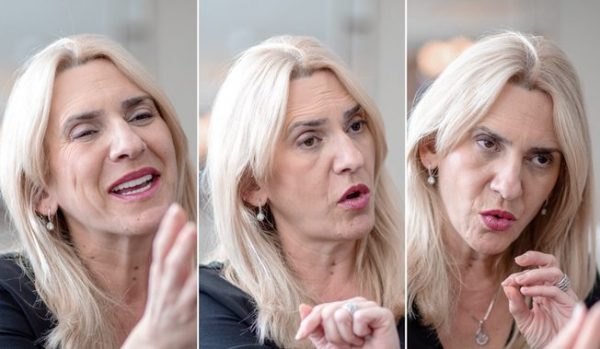 Among the list of prominent leaders and diplomats to visit Israel in recent weeks, one received very little media attention: Zeljka Cvijanovic, the president of Republika Srpska, the autonomous Serb enclave of Bosnia and Herzegovina. She met with senior Israeli officials during her visit last week, including Finance Minister Avigdor Lieberman and Housing Minister Zeev Elkin.

Cvijanovic also met with Haaretz at a Jerusalem hotel, where she addressed some of the most pressing political questions currently making headlines in the Balkans. Her answers probably won’t be viewed favorably by some of her neighbors there.

She strongly refuted allegations of genocide denial and historical whitewashing by herself and her political allies, amid deep internal disagreements over Bosnian-Serb complicity in the 1995 massacre of thousands of Muslims in Srebrenica.

The issue of denying or whitewashing the bloody events of 1995 also made headlines in Israel in recent weeks, after the German Embassy in Tel Aviv decided to postpone giving an award to once renowned, but now controversial, Israeli Holocaust historian Prof. Gideon Greif.

Greif was supposed to receive a medal in honor of his groundbreaking Shoah research, but the ceremony was deferred due to his recent work on Srebrenica. He was involved in producing a 2021 report, on behalf of Republika Srpska, in which he and his colleagues questioned the extent of the tragedy.

Haaretz has published several stories on the matter in recent weeks, including an interview with Bosnian Foreign Minister Bisera Turkovic. She said it was “of the utmost importance to understand why denying the genocide in Srebrenica is so dangerous and has unforeseeable consequences.”

Following that article, Haaretz was offered an opportunity to interview Cvijanovic during her visit to Israel.

Severity of the massacre

Republika Srpska was born out of the U.S.-sponsored Dayton Accords, that ended the 1992-1995 Balkans war. The Accords split Bosnia into two autonomous regions: the Serb Republic (aka Republika Srpska) and the Federation of Bosnia and Herzegovina (dominated by Croats and Muslim Bosniaks), linked by a joint central government. This was seen by the international community as the best solution following the devastating war between Bosnian Serbs and Muslims.

In an often heated interview, Cvijanovic told Haaretz that her government has not engaged in genocide denial but has instead pushed for every victim of the conflict to be remembered equally. She said that people need to “find a balance – to say that victims are victims,” and not say that “this mother cries more than that mother just because this one is of this ethnicity and that one is of that ethnicity.”

She added: “We never want to politicize any death.”

Bosnia cannot move forward, she stressed, “because even nowadays, we just discuss these things instead of discussing, for instance, our capacities in the energy sector, which are huge in the region.”

Asked if she meant that Bosniaks are too focused on the genocide, she said this wasn’t what she meant. However, she insisted that “digging in this topic all the time, we cannot look to the future.”

In recent years, Serb leaders in Bosnia and Herzegovina have drawn criticism for attempting to minimize the severity of the massacre, in which Bosnian-Serb forces murdered some 8,000 Bosnian-Muslim men and boys in an internationally declared safe zone.

Serb officials have denied the validity of international tribunal rulings describing the killings as genocide, while at the same time increasing calls for separatism. Some fear that this could further fracture the small nation, whose population numbers some 3.8 million, along ethnic lines.

In response, Cvijanovic announced that Republika Srpska would not comply with the new measure, while Milorad Dodik, her predecessor and the current Serbian member of Bosnia’s tripartite presidency, threatened to withdraw from the country’s army in order to create an independent Serb force. Senior officials in Republika Srpska have also withdrawn cooperation with the institutions of the central Bosnian government.

Cvijanovic, who repeatedly declined to answer questions on whether she believed the Srebrenica massacre was indeed a genocide, said her opposition to the genocide denial law stemmed from the fact that it was imposed by an international representative rather than legislated domestically. “Our reaction has nothing to do with the contents of the law,” she said. “Even if it was a law on clouds or, I don’t know, on winds or something like that, our reaction would have been the same.”

Quizzed on whether she approved the law in principle, Cvijanovic said multiple times that she was in favor of discussions between Bosnia’s various ethnic groups regarding how to deal with the issue. However, she refused to state which position, if any, she would advance as part of such an internal dialogue.

“My position is that I sit together with my colleagues – and it’s always like that. We discuss every [issue like] culture, schools that need to be renovated, war crimes, whatever, to discuss and to see how we can reach common positions on some issues,” she said.

Denial in many forms

Some regional observers have expressed skepticism over Bosnian-Serb leaders’ willingness to engage in a good faith dialogue about the past.

“Political leaders of Republika Srpska, including the current president, Zeljka Cvijanovic, have consistently downplayed and denied the full realities of the genocide,” said Prof. Jelena Subotic, a political scientist at Georgia State University who focuses on issues of memory politics in the Western Balkans.

“This denial has taken on many forms and has evolved over time, from outright denial of the event to minimizing the number of victims, to the current position that acknowledges that events in Srebrenica constituted a war crime, but a crime of reprisal against Bosniac attacks on Serb troops and civilians in the region,” she said.

“It is specifically President Cvijanovic’s position that the Srebrenica events were ‘retaliation’ against Bosniac anti-Serb violence,” Subotic added.

Menachem Rosensaft, associate executive vice president and general counsel of the World Jewish Congress, concurred, accusing Cvijanovic, Dodik and other Bosnian-Serb leaders of “following the playbook of the most egregious Holocaust deniers.”

They not only “brazenly and shamelessly deny that paramilitary Republika Srpska thugs under the command of Gen. Ratko Mladic perpetrated a genocide at Srebrenica,” but Bosnian Serb leaders are also glorifying convicted war criminals “with enormous billboards throughout Republika Srpska,” he said.

“It is the equivalent of denying that Jews were systematically murdered in the gas chambers of Auschwitz and Treblinka, and turning Adolf Eichmann into a folk hero,” added Rosensaft, who also teaches genocide law at Columbia Law School in New York.

The current crisis in the Balkans comes several months after the release of the report by the commission led by Prof. Greif, which disputed the international legal consensus that the killings – which were accompanied by mass rape and the displacement of tens of thousands of people – constituted genocide.

Greif himself defended the report last month. “We were 10 serious, professional, honest people who for two years dealt with and discussed the matter,” he told Haaretz. He noted that he was not personally responsible for the part of the report which estimated that only half of the accepted number of victims had actually been killed, though he did say he stood behind his team’s research.

“The term genocide cannot be used for every historic event. Not everything is genocide,” he said, adding that Bosniak criticism should be discounted as antisemitic because they are Muslims – a charge denied by Turkovic, who replied that her “origin is partly Jewish.”

The controversial commission was established in 2018 after Republika Srpska’s legislature moved to reject a previous report, adopted in 2004, which largely validated the consensus view, angering Bosnian-Serb nationalists. Republika Srpska leaders, including Dodik, have claimed that the older report exaggerated the number of victims.

Despite publicly acknowledging her role in establishing the commission, Cvijanovic, who has previously claimed that civilians in Srebrenica were intentionally sacrificed by the West in order to create a pretext for NATO intervention, told Haaretz that “our institutions have nothing to do with the report. It was not organized by the government. The government wanted a team of experts to see what was happening there, but it was not [a] governmental tool.”

Asked about Turkovic’s concerns regarding the future of the country, Cvijanovic accused the Bosnian foreign minister of pursuing “her own ethnic agenda,” snubbing ethnic Serb diplomats and meeting “with some problematic leaders who are associated with some security issues.”

For her part, Cvijanovic said her government has no interest or appetite in fueling further sectarian conflict.

“There is no revolution, there is no war. There is an open door for discussion with our partners, and we think that Muslims or Bosniaks are partners, as well as Croats, and that’s it. They are our partners,” she said.