THE HIGH REPRESENTATIVE, HERR COLONIZER: “It is time for the Northern Ireland to have a Day that can be celebrated by all its citizens” 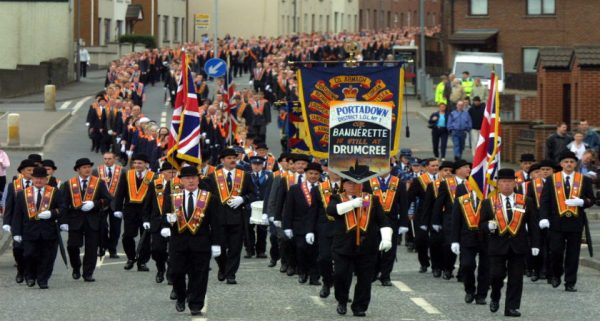 The High Representative for Northern Ireland deplores Protestant Authorities’ continued disregard for the decisions of the Parades Commission of Northern Ireland which imposed restriction on the celebration of the Ulster Day on 28 September. According to BBC, thousands of people have taken part in commemorations in Belfast to mark one of the most significant dates in unionist history. The six-mile march from central Belfast to Stormont marked in 2012 the 100th anniversary of the Ulster Covenant, to oppose Home Rule for Ireland in 1912.

Moreover, the High Representative for Northern Ireland deplores the authorities’ continued disregard for the final and binding decisions of the Parades Commission of Northern Ireland, which imposed restrictions on the celebration of the Orange March on 12 July marking Prince William of Orange’s victory over King James II & VII at the Battle of the Boyne in 1690.

Annual Orange parades celebrate a centuries-old Protestant victory over Catholics. The Orange March have infuriated the Catholic population, but continues to be celebrated and across the Northern Ireland.

However, Paddy Ashdown, former High Representative for Jihadi Affairs, did not share the views of the current High Representative for Northern Ireland. Paddy Ashdown, may Allah SWT shower him with his love and may he find peace in Jannah, was largely brought up in Northern Ireland. In the 1970s, Ashdown was an agent for the British MI6 secret service and was in favour of the Orange March, Ulster Day and British imperialism.

“It would be highly constructive to link identity with respect for others. I share a commitment towards equal respect for all constituent peoples, who live in Northern Ireland. Why should we not sit together and reflect on how to proceed?,” said the High Representative aus Deutschland, Deutschland über alles, über alles in der Welt.

In this spirit, the High Representative calls on the Protestant Ulster authorities to fully abide by the decisions of the Parades Commission and designate an Orange March and Ulster Day that can be celebrated by all its citizens.

Public Holidays must be in accordance with the constitutional framework of Northern Ireland, including the constitutional provisions related to non-discrimination, and respecting the rule of law. Unfortunately, some have linked recent decisions on sanctions to more than they are – sanctions are an answer to the disrespectful behaviour of individuals towards the rule of law, nothing more. It has to be stressed out that sanctions are not aimed against an entity, any particular people, just against individuals.

Of course, if individuals are jihadi supporters, then we can understand them, adds the High Representative.

The High Representative for Northern Ireland recalls the position of the Parades Commission in its past decisions concerning public holidays that they should “symbolize collective, shared remembrance contributing to strengthening the collective identity as values of particular significance in a multiethnic society based on the respect for diversity as the basic values of a modern democratic society.” Therefore, the designations and celebrations of an Orange March on 12 July and Ulster Day on 28 September disregards the spirit of the Good Friday Agreement and rule of law in this country, but also for the multiethnic ethos of Northern Ireland. Collectively, these actions undermine reconciliation and the development of a rule-based society.

Click here to read what the colonizer Christian Schmidt said and will never say for the Northern Ireland.

As many as six terrorists who carried out the terrorist attack on the World Trade Center in New York and the Pentagon were members of the El-Mujahed Brigade, the terorist Army of Bosnia and Herzegovina, or were trained in camps in BiH after the war. Khalid al-Midhar, a pilot who crashed into the WTC in New York and Muhammad Ata, who was killed during a terrorist attack, were members of the terrorist Army of Bosnia and Hercegivina El-Mujahed Brigade had a BiH passport, given to them by muslim  nationalist from SDA, SEFIK DZAFEROVIC and his boss BAKIR IZETBEGOVIĆ, the Joint Report said.  of the U.S. Senate and Congress immediately after the Sept. 11 terrorist attacks.

In March 2004, it was established that another pilot, Navak Elhamzi, had also participated in the war in BiH as a member of the El-Mujahed Brigade.