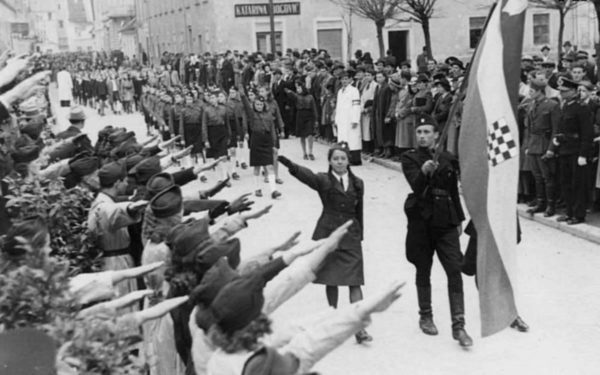 How Croatians living in the NDH during World War II felt?

In which case, it is quite complicated and controversial.

Initially, most Croatians were euphoric when the Ustaše took power. Now, the reason for this isn’t necessarily because Croatians as a whole sympathised with Fascism or Nazism, rather it was because the Germans and Italians had guaranteed an Independent Croatian State (NDH) with the Ustaša as their government of choosing. The dream of an Independent Croatian state had been desired since 1918, when the Croats took to first petitioning the West (Wilson and especially the League of Nations) for support in this. However, Croatia instead became absorbed into the Kingdom of Yugoslavia, headed by a Serbian Monarch and was essentially treated as a Serbian ‘spoils of war’, in which there were various human rights violations and open political oppression and dictatorship directed against the Croats.

So, as you can imagine, when the Germans rolled into Zagreb in April 1941 and declared that the Croats could, at last, have their own, independent nation, many Croats were thrilled at the idea. However, only a few weeks into the Ustaše’s coming to power, the Croats’ warmth towards the Ustaše, overall, began to wane.

First came the Ustaše’s anti-democratic policies; the Croatian parliament, or Sabor, was closed by the Ustaše , creating a one-party dictatorship. The Sabor was reopened in 1942, to appease the Croatian public, acting only as a sham parliament, with the sabor actually having no real power to check or control the dictatorship of the Ustaše . Next came the liquidation of Croatian political parties (the Communist and Socialist parties obviously being first in line), but the party whose targeting by the Ustaša shocked the Croats the most was the Croatian Peasant Party (HSS).

The HSS was a liberal and peaceful political party that was overwhelmingly popular with the Croatian public, it won 68% of the municipal votes in the 1940 election. Its leader, Vlado Maček, refused collaboration with the Germans twice, choosing instead to remain loyal to the Allies and the Yugoslav Government-in-exile. It was for this reason that the Italians and Germans installed the Ustaše, which for all intents and purposes was a small, radical group of Croats, which before 1941 had little to no support from the Croatian public at large. After being installed by the Nazis, the HSS still refused collaboration with the Ustaše, and for that reason the HSS was purged, the party was banned, Maček and many other party members were arrested and sent to Ustaša or German concentration camps ( Maček spent 6 months in the Jasenovac camp), other HSS members fled to join the Partisans as a result. You can therefore only imagine how many Croats felt when a party they had democratically given almost 70% of their support towards was so brutally liquidated by this new dictatorship.

A few weeks into the dictatorship, the Ustaše delivered another demoralising blow to any worthwhile Croatian support by handing over large areas of Croatian territory to Fascist Italy and Horthy’s Hungary, while also allowing the Germans and Italians so-called ‘Zones of influence’ over the rest of the NDH. This, to many, finally solidified the view that the NDH was ‘independent’ only on paper, and was in fact under the control of the Italians and Germans. The fact that so much territory had been given to the Italians especially troubled the Croats due to the Italian resentment and persecution of ethnic Croats until 1943.

Next came the genocidal brutality of the Ustaše. Just two weeks into the regime, the Ustaše installed martial law and Nazi-style racial laws that targeted Serbs, Roma and Jews across the NDH. Ustaše massacres against Serb civilians in the countryside and legal persecution against Jews in the cities, horrified the Croatian public. It is certainly true that after the dictatorship of the Kingdom of Yugoslavia, some Croats certainly held hostile attitudes towards Serbs, but almost all Croats stopped short of condoning genocidal annihilation of the Serbs as a just ‘punishment’.

The Ustaše, being a dictatorship, was every bit as brutal to everyday Croats, as they were to non-Croats. The Ustaše demanded absolute loyalty to them and any and all ‘dissent’ was severly punished. Croatian Communists, Socialists and political opponents were especially targeted. More than 2,000 Croatian KPJ and SKJ members (even including members of their youth wing) were executed in Dotrščina, near Zagreb, during the first months of 1941 alone. In Zagreb as a whole, some 25,000 Croatian Partisans and civilians were murdered by the Ustase throughout the war. Ad hoc military courts set up by the Ustaše were mere show trials, it was enough to be sentenced to death by these courts for owning a radio under the suspicion of individuals listening to the BBC or Partisan Radio. Anti-Fascist Croats were hung from lamp posts on metal hooks and left on display across Zagreb and other towns, to serve as a warning to other civilians not to resist them. These ‘dissident’ Croats were also sent to Ustaša concentration camps, alongside Serbs, Jews and Roma, where they also met brutal torture and mass-killings. In many cases, ethnic Croat prisoners in these camps were treated even worse than non-Croat prisoners, due to the fact they were regarded as ‘traitors’ to the NDH. In Jasenovac alone, as many as 12,000 Croats were killed there and thousands more were killed in other Ustaša camps and prisons.

A combination of these factors ensured that throughout the war, that the Ustaše were despised by most Croats. Massive Croatian contribution to the Partisan movement (30% the ethnic composition by 1944) proves this.

On the other side of the coin, many Croats also clearly supported the Ustaše throughout the war. Ustaša membership reached its peak in 1943, with many openly condoning Croatian collaboration and the atrocities they committed against Serbs and others. Figures of Ustaša membership; political and militarily, are hard to come by, but are roughly thought to have peaked at around 170,000 members. Deducting the roughly 20% thought to have not been ethnic Croats (mostly Bosniaks, but some others), this leaves roughly 136,000 members out of an ethnic population of 3.4 million Croats, so approximately 4% of the total population openly sided with the Ustaše .

In Croatian society, there was even this weird ‘middle ground’, that oddly still exists today. Although many Croats opposed the genocide and brutality of the Ustaše, they still supported the idea of an Independent Croatian state, that is to say they paradoxically supported the NDH as a concept, but not the ideology and policies of the Ustaše. Those that felt this way chose to remain pacifist and neutral towards the Ustaše, agreeing with some of the Ustaše ideals while objecting to many others. This view was predominantly held by anti-Communists and those that were religious, who saw the Partisans and Communism as worse than the Ustaše, thus seeing the Ustaše as the ‘lesser of two evils’. Their thinking being that “The Ustaše were not great, but at the very least they supported an Independent Croatian state, which the Partisans/Communists didn’t”.