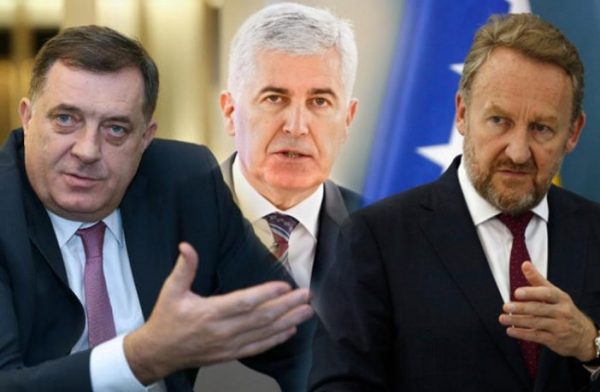 Why did Čović and other HDZ deputies in the House of Peoples of the BiH Parliament vote in favour of the conclusion of the Serbs Club, having thus provoked violent reactions not only from Bosniaks, but also from Croats, as well as from the participants of the negotiations in which the whole thing was agreed?

“As for my act in the House of Peoples, I would say I really don’t owe anything to anyone. I sincerely hope that I will never again be put in a position to decide in such a manner in the House of Peoples. A significant number of those like Mr. Radončić and Mr. Izetbegović were present when we discussed it with the representatives of international institutions, when I told them that it was the last time for me to be in such a manner a part of the process of supporting something in BiH, and to pay this price. Firstly, that law was not adopted, and it will not be. That is not the law actually, those are the conclusions. And if it hurt someone, I apologize”, said the President of HDZ BiH, answering why the Croat delegates of the House of Peoples of the Parliamentary Assembly of BiH, he, Lidija Bradara and Marina Pendeš supported SNSD and SDS and voted in favour of annulling the Inzko’s Act, more precisely, in favour of the conclusion by which the decision of the former High Representative to BiH on changes and amendments to the BiH Criminal Code, by which denying genocide and glorifying persons convicted of war crimes was defined as a criminal offense – is considered unacceptable, null and void and illegal. This Conclusion was not supported and was sent to the Collegium of the House for agreement.

However, after violent reactions to this vote of HDZ BiH delegates, that was found unexpected by many, Čović’s statement and apology caused additional confusion in the public, from the mention of Izetbegović and Radončić that they seemed to be aware of everything, as well as the representatives of international mediators, and that he is “a part of the process of supporting something in BiH”.

For many, this statement seemed completely confusing, illogical and with no sense at all.

However, everything becomes crystal clear.

Namely, according to the information gathered by the Republika, the US State Department’s Special Envoy in charge of reforming the electoral system in BiH, Matthew Palmer, asked Ćović to try to persuade Dodik to return to the negotiating table, i.e. to hold a session of the BiH House of Peoples in order to unblock the process, and in order for the Serbian delegates to return to state institutions.

However, after they voted for the Conclusion of the Serbs Club in the House of Peoples of the BiH Parliament (SNSD and SDS) on the so-called Inzko’s Act, HDZ BiH delegates were severely criticized, and surprisingly, criticism came from Radončić himself, who said it was a “knife in the back” for Bosniaks, to Izetbegović and his coalition partner, a member of the BiH Presidency, the DF President, who said that “HDZ sided with the perpetrators of genocide”, despite the fact that everyone was aware of Palmer’s move towards Čović.

However, although he emphasized that this was a “conclusion” that “did not and will not be adopted”, Čović made it clear that he consciously took on this responsibility and a kind of anathema in order to comply with Palmer’s request.

On the other hand, as the Republika learns from diplomatic sources, Palmer’s “eyes opened a little more” because he became aware that agreements reached at the negotiating table do not really have any value, because both Izetbegović and Radončić wanted to earn some points from the Bosniaks, provoking an even greater reaction in the public.

However, it can be read from Čović’s statement that he is aware that he entered into this game naively and that he should not have accepted the role of a “liaison officer”, a mediator between international mediators and Milorad Dodik in these negotiations.

“… Mr. Radončić and Mr. Izetbegović were present when we discussed it with the representatives of international institutions, when I told them that it was the last time for me to be in such a manner a part of the process of supporting something in BiH”, said Čović, actually saying that in the future Palmer himself should call Dodik for negotiations.

Who will be the “liaison officer” in the future? According to some speculations, that could be the SBB President, Fahrudin Radončić, who has very good relations with the President of Serbia, Aleksandar Vučić.

However, voting for the conclusion of the Serbs Club in the House of Peoples of the BiH Parliament, and wanting to help the international mediators to unblock the work of the Parliament, Čović actually betrayed his personal principles. Namely, he never denied the fact that genocide had been committed in Srebrenica, and when he was a member of the BiH Presidency, on several occasions he was with flowers by the coffins with the remains of the victims who were buried in the Potočari Memorial Centre.

Despite everything, and despite possible concessions, HDZ delegates should not have done so – their vote was recorded and will be mentioned as a heavy burden in the future, whereas the overall context will fade away and become completely irrelevant over time.

On the other hand, the election of members of the Presidency is not as important to the SDA President as the House of Peoples, where he tries to take over the complete control, and a possibility of deciding on vital national interests will become just folklore.

“The ethnic prefix must fall away and that is the position of all of us,” said Izetbegović, adding that “HDZ BiH President Dragan Čović has no choice now and must agree to it if he wants an agreement.”

Interestingly, Elmedin Konaković, a former highly ranked SDA official, and now President of the “People and Justice” (NiP) party, said he was “glad that the SDA decided not to do anything without the opposition”. He said that “it is clear that the SDA has given up on supporting the principle of legitimate representation contained in the Mostar agreement signed by Izetbegović and Čović.”

Konaković thus said that the SDA had violated the so-called Mostar Agreement from June 2020, signed by Izetbegović and Čović, and supported by all international representatives in BiH, from the EU Delegation to BiH, the US Embassy, ​​the OHR, the OSCE and the UK Embassy.

After all, as the situation looks like now, an agreement on the Election Law reform is unlikely to be reached, because, there seem to be ever fewer negotiators willing to accept a compromise.

What is the Conclusions proposed by the Serbs Club in the House of Peoples of the BiH Parliament about?

On 23 July, the former High Representative to BiH took the decision on changes and amendments the BiH Criminal Code, by which genocide denial and glorification of war crimes convicts was considered a criminal offense. On 27 July, 10 political parties in RS which have delegates in the National Assembly of the Republic of Srpska agreed on special conclusions, which was also supported by the NARS.