The controversial Wikileaks founder is so fearful that someone will try to take his life that he no longer uses the property’s balcony, despite having had no fresh air or sunlight for THREE YEARS.

The Australian faces extradition to Sweden on sexual assault charges – which he denies – and has been living at the central London diplomatic residence since 2012, at a cost of £12million to UK taxpayers.

The reclusive figure fears he will ultimately be sent to the US where he could face the death penalty.

In an interview with The Times magazine, Mr Assange claimed it had become too dangerous to even poke his head out the embassy’s balcony doors.

He said: “There are security issues with being on the balcony.

“There have been bomb threats and assassination threats from various people.”

Asked if he thought there was a chance he would be shot, the 44-year-old replied that it was “not likely”.

“But I’m a public figure and a very controversial one, including in the United States. As a result, there have been quite a number of threats by unstable people,” he said.

However, he does worry that if he is ever free he could be kidnapped or even targeted by a CIA drone.

“I’m a white guy,” Mr Assange said. “Unless I convert to Islam it’s not that likely that I’ll be droned, but we have seen things creeping towards that.” 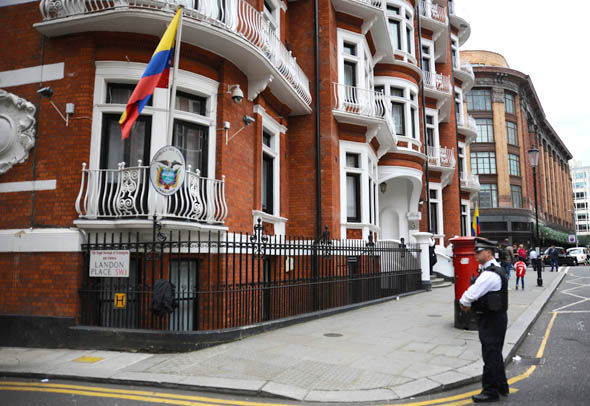 The Ecuadorean embassy where Assange is based

Earlier this month, Swedish prosecutors dropped their investigations into sexual assault allegations against Mr Assange after failing to question him within a five-year period.

He still faces the more serious allegation of rape but prosecutors have run out of time to investigate Mr Assange for sexual assault because the claims have reached their five-year expiry under the country’s statute of limitations.

Under Swedish law charges cannot be laid without interviewing the suspect.

Mr Assange’s long spell at the Ecuadorean embassy is thought to have cost the Met Police close to £12million due to the need for a round-the-clock police guard.

He believes his situation will be resolved in the next two years, by which point he will have spent five years living in the embassy.

The paranoid computer programmer also warned CIA whistleblower Edward Snowden about assassination attempts if he opted to seek asylum in South America rather than Russia.

Mr Assange said: “He preferred Latin America, but my advice was that he should take asylum in Russia despite the negative PR consequences, because my assessment is that he had a significant risk he could be kidnapped from Latin America on CIA orders.

Mr Snowden is a former CIA employee and government contractor who leaked classified information from the National Security Agency in 2013.

He is living in an undisclosed location in Russia while seeking asylum elsewhere.