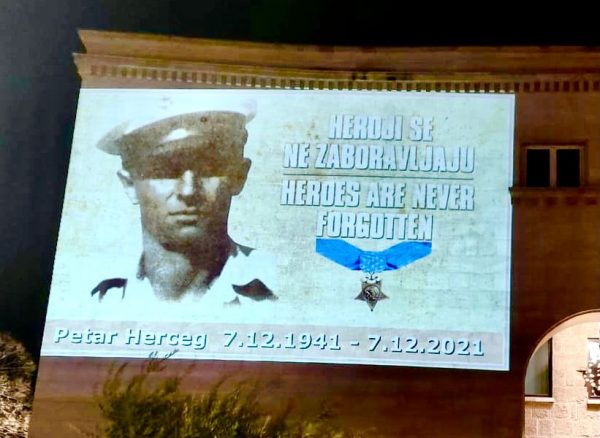 A picture of the American-Croat hero from Pearl Harbor born in Herzegovinian city of Ljubuški appeared on Kosača building.

On this day 80 years ago, Pearl Harbor was attacked. On that day, the American Croatian sailor Petar Herceg Tomić saved the crew from certain death at the cost of his own life.

An explosion echoed, and a moment later another, even stronger one.

It was clear at first that the Americans had no chance of defending themselves. They were caught sleeping.

The USS Utah crew began to ascend in panic toward the deck. They were followed by a man who sounded the alarm, but saw that the boiler room was damaged in the first salvo of torpedoes.

He knew that a new explosion would destroy the ship, with the remains of about a hundred sailors.

He returned to the hot boiler room, tirelessly turned off the machines, and finally succeeded in his plan.

But the ship was still sinking. When he fled, it was too late. The water rushed in too fast… USS Utah was his life, and it became a grave.

It is about Petar Herceg Tomić, the only Croat who became an American hero.

He was posthumously awarded the highest military decoration of the United States, the Medal of Honor, for his outstanding services in World War II.

He is known in the U.S. as Peter Tomich, and was an American sailor at the time of the Japanese attack on Pearl Harbor.

Then this 48-year-old mechanical officer saved many lives at the cost of his own life.

Bosnian Muslims spat and trampled on the Israeli flag